New Choral Memorial to the Fallen Men and Women of the U.S. Armed Forces 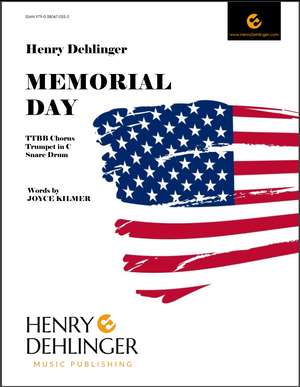 Henry's new choral memorial to the fallen men and women of the U.S. armed forces is available now from J.W. Pepper. Scored for TTBB chorus (An SATB version is on the way), Memorial Day is a setting of American poet and fallen hero Joyce Kilmer's solemn poem.

Henry's friend and artistic collaborator Kerry Wilkerson knows a thing or two about patriotic music. In 2018, he retired from the U.S. Army Chorus, one of the few professional men’s choruses in the United States. It has a long-established reputation for excellence in the performance of men's choral literature, from military music and patriotic standards to pop, Broadway, folk, and classical music.

Kerry challenged Henry to compose a choral setting of text with a patriotic American theme for four-part men’s chorus. Not one to shy from a challenge, Henry accepted.

Which text to choose?

The composer's friend and neighbor, Jenny Letowt, suggested he would find his answer among the poetry of Joyce Kilmer. She lent Henry her copy of Trees & Other Poems by Kilmer, which he read and fell in love with.

Kilmer was a celebrated American writer, best known for his 1913 poem, Trees. Literary critics, from Kilmer’s time to the present, fault the poem as being overly sentimental and romantic. Yet many readers, Henry included, find the poem charming. Nothing wrong with sentimental.

Kilmer was also a patriot, who made the ultimate sacrifice. He was killed by an enemy sniper’s bullet on July 30, 1918, during the Second Battle of the Marne in World War I.

After reading Kilmer's Trees & Other Poems, Henry found a poem which could not have a more patriotic American theme. It is called Memorial Day. Like Trees, it is delightfully sentimental, and it inspired him to compose his new choral work of the same name.

Scored for four-part men's chorus, trumpet in C and snare drum, Memorial Day is the composer's tribute to the fallen men and women of the U.S. armed forces.