Henry is delighted to announce the world premiere of three new choral settings of poems by James Joyce. Arranged especially for conductor Thomas Colohan and the Washington Master Chorale's 10th Anniversary Season opening concert, Night Piece, Strings in the Earth and Air and Bahnhofstrasse were originally composed as part of a cycle of ten art songs. They will premiere on October 27, 2019 at the Church of the Epiphany in Washington, D.C. under the direction of Maestro Colohan, artistic director of the Chorale.

Night Piece, arranged for unaccompanied SATB chorus, begins as a reverent, if not haunting, portrait of “night’s sin-dark nave.” Replete with ecclesiastical imagery, this subdued choral meditation swells into a tender exultation of the night sky with soaring melodies and lush harmonies. Joyce’s characteristic neologisms abound: A star-knell tolls as upsoaring clouds surge voidward, high above the “adoring waste of souls.”

Strings in the Earth and Air is a light interlude for SATB chorus and high voice solo with sparkling piano accompaniment and impressionist overtones. The song’s sultry solo vocal line emerges from a progression of minor and dominant 9th chords in this jazz-inspired hymn of nature.

Bahnhofstrasse is an existential piece about the loss of youth. The title refers to the posh district in Zurich, Switzerland where in August 1917 Joyce suffered a sudden and painful attack of lumbago, later compounded with increasing blindness as a result of glaucoma. The four vocal lines float wistfully over a minimalist piano accompaniment that steadily reiterates a simple, eerie motif as the poet’s failing eyes mock his deteriorating youthfulness. 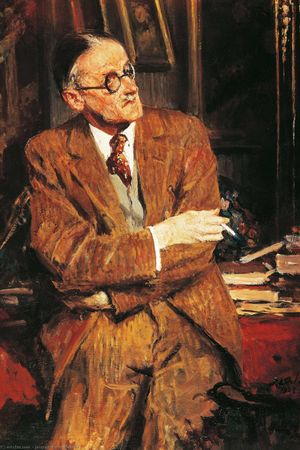