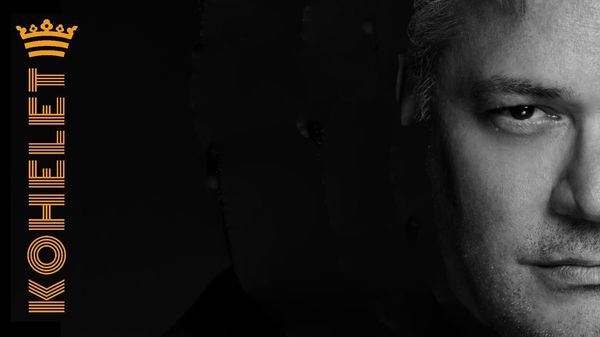 Next in the 2021-22 season’s slate of premieres is Kohelet. Commissioned by the Washington Master Chorale, Santa Clara Chorale and Santa Clara University Concert Choir, Dehlinger’s new major choral work premieres March 20, 2022, in Washington, DC, and enjoys its second performance on May 21, 2022, in Santa Clara, CA.

The composer started work on Kohelet early in 2018. By spring, Dehlinger had sketched out the first and third movements. At a private salon concert in late April in Warrenton, Virginia, Dehlinger presented the third movement love duet with his friends Kerry Wilkerson and Metropolitan Opera soprano Danielle Talamantes, for whose voices he penned the bass-baritone and soprano solo parts, respectively.

“It was kismet,” Dehlinger recalls, “Among the guests was Tom Colohan, artistic director of the Washington Master Chorale. Tom and I instantly became friends. It turns out we were both connected to Santa Clara University, my alma mater in Northern California where for eight years Tom served on the music faculty as director of choral activities."

Kohelet combines Biblical Hebrew verse with lush, modal melodies, energetic meters and colorful harmonic textures. Dehlinger arranged the text from the Book of Ecclesiastes and Song of Songs in the original Hebrew. As it happens, the composer’s wife Lauren—to whom he dedicated the work—is a Hebrew speaker and linguist by training. Lauren transliterated the Hebrew text for him.

One of twenty-four books of the Tanakh, or Hebrew Bible, Ecclesiastes is also one of the canonical Wisdom Books in the Old Testament of most Christian denominations. The word, Ecclesiastes, is the Greek translation of the Hebrew word, Kohelet, which means “one who gathers others together” or, more commonly, “teacher.” The bass-baritone soloist sings the part of the Kohelet—King Solomon according to tradition—while the soprano soloist sings the part of his expectant bride in the third movement love duet adapted from Song of Songs.

Dehlinger laughs as he remembers a friend's recent quip that Kohelet was the love child of Leonard Bernstein’s Chichester Psalms and Carl Orff’s Carmina Burana.

“There may be something to that,” Dehlinger says. “I certainly drew inspiration for Kohelet, in part, from the Bernstein Chichester Psalms. It's a work I performed many times as a singer with the San Francisco Boys Chorus. Like Chichester Psalms, Kohelet is an ecumenical blend of Judaic antiphonal singing and Christian choral tradition. In fact, my original vision was for Kohelet to be a sort of Solomonic sequel to the Davidic psalms.”

“The feeling you get from that big, spine-tingling opening in O Fortuna [Movement I of Carmina Burana] is definitely there in the opening of Kohelet,” Dehlinger adds. “But it’s not sinister as in the Orff. The Kohelet opening is very modal, but the positive, uplifting character of the major mode shines through.”

"For me," Dehlinger says, "Kohelet is an examination of the age-old question about the meaning of life. Its wise sayings are embedded in the popular consciousness: Vanity of vanities, all is vanity. There is nothing new under the sun. For everything there is a season, and, perhaps my favorite, The race is not to the swift.”

"If the audience takes a moment to ponder these after listening to the work," the composer concludes, "it will have been a success."

Please check your inbox now for a confirmation message. Click the link to confirm your email address and activate your subscription.

Thank you for signing up!